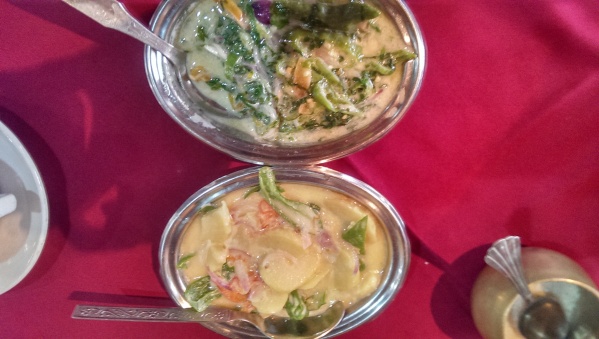 If there is one thing common in Bhutanese cuisine, it’s that Bhutanese love it spicy! chilies are not considered as seasoning but a vegetable, and so traditional Bhutanese dishes have a rich content of chili in them, which is the case with the national dish of Bhutan “Ema-Datshi”. Ema-Datshi is lavishly spiced with dried or fresh, green or red chili(ema) cooked in cheese(datshi) is a savory dish you must try while in Bhutan. The recipe has a lot of variations and is available with potato and cheese (Kewa Datsi), mashroom and cheese (Shamu Datsi).

Bhutanese food is influenced by Indian, Chinese and Tibetan culture. Red rice constitutes the main chunk of most of the meals. Its pale pink, soft and bigger than our white rice, which is generally served with curry, comprising meat(pork and chicken) or vegetables cooked with chili. A lot of Bhutanese  people are vegetarian and there is a good variety of vegetarian food available although much of it is made using a liberal amount of chili and a smothering of cheese sauce.

On our way to Thimphu we stopped at D2K restaurant to satiate our hunger.  For our first meal in Bhutan we decided to savor the Bhutanese taste and hence ordered some red rice, Ema-Datshi,  and Shamu-Datshi with chicken curry and  pork curry. If you love spicy food then you are going to love Ema-Datshi and of you love sweet then you should go for Shamu-Datshi. Most of the meat cooked in Bhutan comes from India and so the pork and chicken you taste might be a bit hard, so non -vegetarians may have to stick to chicken and will get bored after a couple of meals, while vegetarians can stick to restaurants which offer Indian cuisine. Although Bhutanese cuisine is zesty you can find it monotonous, as most of the visitors can not eat such a spicy and hot food so the chefs try to alter the flavor according to tourist, thus losing the essence of Bhutanese cuisine.