It was a usual wednesday afternoon, i was working on my laptop and there came a call from my friend asking how fascinating the idea of a trek is, and we decided to go to Savandurga hills the next Sunday.

We left from Bangalore at 6:30 in the morning and stopped at a small shop in kangeri to have some authentic south Indian breakfast, at around 10:00 we were at the base of hills with all set to start climbing. Savandurga which is considered to be among the largest monolith hills in Asia, and is formed by two hills known locally as Karigudda (black hill) and Biligudda (white hill).

We started the climbing around 10:30 and the steep increased in no time and it became difficult to get a good grip and as most of the trail was on the rock with very little vegetation you don’t have anything to hold while climbing and at some places you might have to crawl like gollum :P. You will have to take many breaks between the climb but the stops should be chosen carefully as there are places where its even difficult to stand and you might slip. In some places, you will even find small pools of water accumulated in burrows on the rock face and ripple marks.

After an hour or so of trekking, you will come across a podium with granite columns this is the place where you should stop for breakfast. The clear blue sky and the expanse of green below it make for a mesmerizing sight and a perfect place if you want to take some clicks. We took a break of around 20 mins and started climbing again Soon, we reached that hill, with an open view of the valley on the southern side of Savandurga. From this point you can clearly see the nandi temple, although from here the path is not clearly but you manage to find it with some effort. After around 20 mins of walk we reached the nandi temple. 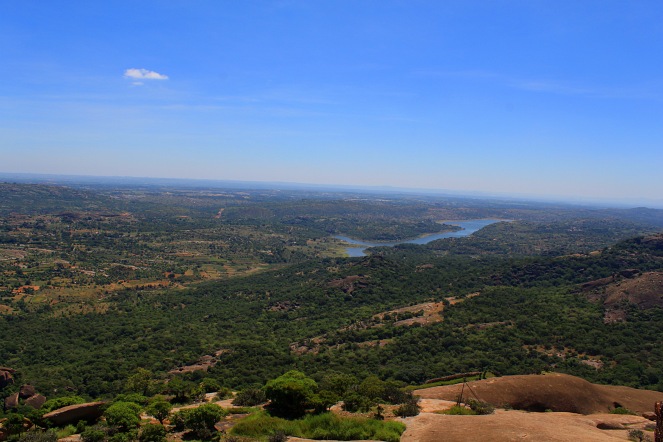 We took around half hour of break and after some mesmerizing views we started our descent, though most of the trek are easy while coming you would not take the chance to consider this easy, the rocky trail does not offer much grip. It took us around one and half hour to come down. At the end we were glad to have come down safely 😀 and were excited after returning successfully.

I would recommend you to take a water bottle with you and not to carry any surplus things, also plan you trek on a cloudy day as there is very little vegetation around and becomes difficult to climb in a hot climate.