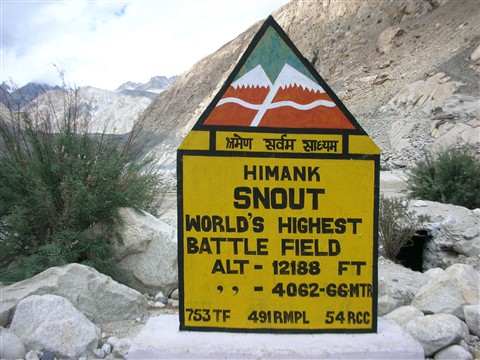 The Siachen Glacier located in the eastern Karakoram range in the Himalaya Mountains is the highest and coldest battlefield in the world at an average altitude of 20,000 feet where the temperature dips to even minus 60 degrees in the winter. The Siachen measures approximately 75km in length and 4.8km in width, and rises to about 4,800m. The Siachen Glacier continues to be a challenging battlefield for the Armed Forces where 97% of the casualties are caused by the weather and altitude, rather than the actual war.India and Pakistan both claims the area and have thousands of soldiers stationed there. According to the present ground positions, India maintains control over most of the Siachen Glacier and all of its tributary glaciers including the major passes of Saltoro Ridge.

Saichen is palce where sun dosent sustain life kerosene does, where fresh food is a luxury, Speech problems, nausea, sleep deprivation and depression are some of the most common problems our soldiers. Even after all these Indian Army has shown a shining example of courage overcoming all difficulties, the Indian Army has also built the world`s highest helipad in Siachen at a place called Sonam, which is approximately 21,000 feet above sea level. Civilians are usually not allowed to go beyond Panamik but the Indian Army conducts a annual trek to Siachen known as “The annual Siachen civilian trek” which gives civilians a chance to trek up to the icy heights of the glacier. The Army takes around 40 people, including its experts, journalists, defence scientists, school cadets and civilian volunteers on the “unique adventure trip”.Before the trek starts there is a training camp for a week which acclimatize the civilians followed by a medical check-up.

Saichen is a perfect example to showcase the patriotism of Indain Army and the extend to which Indian Army can go to protect its nation.